Several weeks ago I sprained my ankle.  I have a trick ankle–(I have always wanted to call some body part a trick whatever ;-)–but the only trick that this ankle does is to randomly give out from time to time.  This ankle has given out so many times in my life that I have lost count.  The last time it had happened was two and a half-year prior, and before that three of so years prior, only that time the trick had me tumbling down a flight of stairs and left me with a foot broken in two places.  Of course, the break took priority over the weak ankle, so I never mentioned it to a doctor, nor had I ever treated it properly when it is sprained.  This last time though, I quit what I was doing fairly soon after I had hit the ground, and instead of trying to carry on as I normally would have, I told my client I could not finish.  I went straight to the store and bought two bags of frozen peas, some ibuprofen, and an Ace bandage. 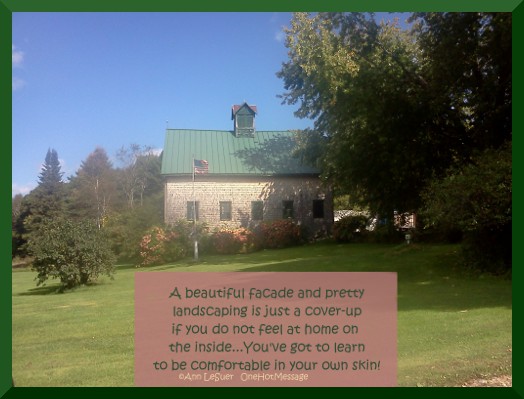 Once I was home, I wrapped the ankle, took some medication for the pain and inflammation, and I elevated my ankle and iced it every two hours and I did this for four whole days.  It was a bad sprain.  My son was with his father that week, so I could actually take care of my poor ankle the way I knew I should have been care for each and every time.   I learned a lot during that time I was laid up.  In the past, I had always hated being laid up.  I am a mover and a shaker.  I had a friend who once told me, many years ago, that even when I was sitting perfectly still, it was as if I was vibrating.  I chalked that up to being a high-strung, expressive, high energy person, and to some degree, I believe that is true.  But these days, I am not strung nearly as high as I used to be.  These days, I can just be.

I had no problem at all laying in bed with my foot up for hours while I read.  I greatly enjoyed laying on my couch just thinking while I iced my ankle.  I felt relaxed and I feel comfortable with just being and I felt more than comfortable with taking care of myself properly.  I felt at peace.  It was lovely.  Of course, I had a lot of time to think and I realized that even two years ago I might not have been able to give myself this  type care.  In fact, I am certain I would not have been able to, and three years ago, there would have been no way I could have held still for even twenty minutes to ice my ankle.  What had changed after a lifetime of moving and shaking?  I finally felt safe in my own skin, and I finally felt safe to be myself fully, and that has only happen in the last year or so.

I thought back to three years ago.  It was shortly after I had left my marriage and I felt happy and free, but I was not relaxed.  I loved where my son and I were living, and I was making life changing choices, but I was wound so tightly that, in retrospect, I am surprised I survived.  I kept having random panic attacks that just came out of nowhere, like the great heart attack that wasn’t a heart attack incident on Thanksgiving night of 2009.  My kids had been home, and we had enjoyed a splendid evening, and a wonderful meal.  With the exception of my little boy, they had gone off to their Dad’s, and I was downloading pictures when I began to have chest pains.  I finally called 911, and there was an ambulance ride, and my adult sons came back over to fetch their brother, and in the end it was all anxiety. As I told the ER doctor, “I think I really just need a good cry.”  After my EKG and lab tests were fine, he agreed, and sent us all home.

The stress of that time still floors me when I think about it.  I had left a hideous marriage with nothing but a child and  duffel bag of clothing.  I knew I was going to prison and I knew I had a horrible divorce to look forward to getting through.  On the outside, I looked fine, but on the inside I was terrified and stressed beyond what most people could handle.  One night I was knitting and I realized that I was sitting perched on the edge of the couch.  I then realized that I never sat back.  I could not relax enough to do more than perch anxiously on the edge of the couch.  When I laid my head on the pillow at night, I had to consciously relax my neck enough so that my head was actually on the pillow, not hovering over it.  Amazingly, I thought I was doing really well at the time, too.

Now I have survived the divorce from hell and all ended well.  I survived prison and while in prison, I got to the core of my pain from age 5 forward and I uncovered my authentic self and have learned to love, respect, appreciate, and care for her—for me.  I know now that the all of that high-strung, ever-moving, vibrating person was me working as hard as I could, with all the power that I had at my disposal, to contain a lifetime of unexpressed emotions and pain.  I certainly expressed emotions, but not the ones that needed to be expressed, and I certainly felt pain, but I drank to cover that up so I could go on for another day holding everything in and functioning to the best of my ability.

Those two years prior to going into prison were like transition in labor.  Things had kicked into high gear, and everything that I had been repressing was screaming to get out, but there was no safe place yet.  Prison was the safe place where there were two very safe people to guide me through the birth of myself and the pain that accompanied the birth.  Now I have no problem just being.  When I work, I work hard, and I move fast, but a lot of the free-floating, hard to contain, frenetic energy is gone.  I do not have to work anymore hold in pain, or sadness, or anger.  It is gone, for the most part, and anything new that crops up is dealt with promptly and easily.  I can and do take care of myself now.  I have no problem setting limits, and it is becoming easier for me to say “no” when I need to say it.  I feel safe because I know it is me who keeps me safe with proper boundaries, kindness, and self-love which is something I denied myself for a very long time.

When I had returned to work after my sprained ankle one of my clients said, “Well, you had a nice little break, didn’t you?”  The comment came from a woman who cannot care for herself to save her life, and the comment was intended to induce guilt.  In the past, I would have felt the need to defend myself, or to justify my actions.  This time I said nothing because I knew I did not need to justify caring for myself.  I just glanced at her, smiled, and kept working.  After a bit, she said, “You really needed to do that, though, didn’t you?  You needed to take care of yourself.”  I replied, “Yes, I did.”

I need to care for myself every day and I will continue to do it, even if some do not understand.  I am safe in my own skin.  I can just be now and that is a miracle.  The true beauty of it all, though, is the fact that now that I allow myself to be me, and I care for myself, everyone else gets to be whoever they are and that is okay.  The only person I have to live with 24/7 for the rest of my life is me.  I get top priority now and by ranking myself that way, everyone in my life benefits greatly.  What a blessed thing it is just being me–finally.  It was well worth the wait.